Powdery mildew originated in the Eastern North America and spread throughout all wine-producing regions of the world in the 1800s to become one of global viticulture’s biggest worries.

If left untreated, powdery mildew can be devastating to susceptible varieties and lead to significant yield losses on the vines.

The costs of preventing and treating powdery mildew are substantial (as much as 37% gross value of production). Spraying vineyards with chemicals many times a year to inhibit powdery mildew generally runs roughly $700 per acre each season, and canopy management puts pressure on rising labor shortages.

Growers can prune infected vines, but scouting the grapes and removing material with powdery mildew is time-consuming for an already stressed team. Other growers are less vigilant, accepting a certain amount of powdery mildew.

Sarah Placella, Ph.D., CEO of Root Applied Sciences (“Root”), founded her company in 2018 to help growers reduce those costs. Her inspiration was a winemaker who told her, “I spray a lot, but I can’t see powdery mildew in the air, so I don’t know when to spray.”

Her solution is a series of in-field sensors that monitor the air for powdery mildew spores and alert the viticulturist of the pathogen presence and quantity so they can spray fungicide in time to prevent its spread. Root offers a subscription service that places the sensors throughout the vineyard to continuously monitor the particles in the air during the growing season. Samples are captured in a centrifuge tube that the grower sends to Root Applied Sciences’ laboratory twice a week for testing. Root is developing a fully automated system for 2024.

“Data from Root's sensors let growers know ten days ahead of the first evidence of powdery mildew on the plant," says Placella, “and the spacing of the sensors allows growers to identify higher risk areas and scout more efficiently.”

Spraying for powdery mildew is a less expensive option than treating it, but it is still costly, so a solution that reduces the frequency of applying pesticides from 25-75% is a prudent financial decision for growers.

Local growers are particularly interested in another advantage of Root’s approach—sustainability. Reducing the number of times a grower has to spray pesticide is better for the environment and the farm workers. Eliminating spraying reduces tractor passes cutting fuel usage and CO2 emissions while reducing soil compaction which helps prevent the loss of oxygen air pockets, making it easier for the vines to get their nutrients. Finally, organic growers and native fermentation winemakers are also interested in another advantage of Root’s approach—better wine, as fewer chemicals allows for a healthier native microbiome which yields better wine. 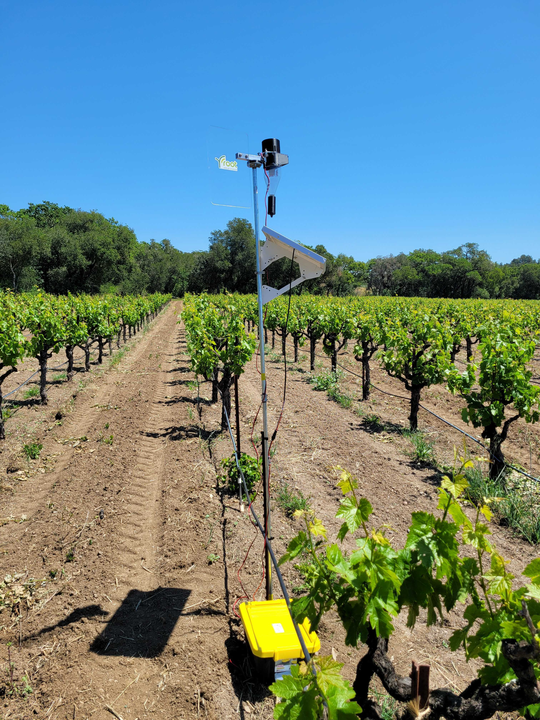 Visit the Root Applied Sciences Booth #107 at WIN Expo to talk with Dr. Sarah Placella, Dr. Julian Bello-Rodriguez, Root’s plant pathologist, and other team members to learn more about how to save money and the environment while fighting powdery mildew.